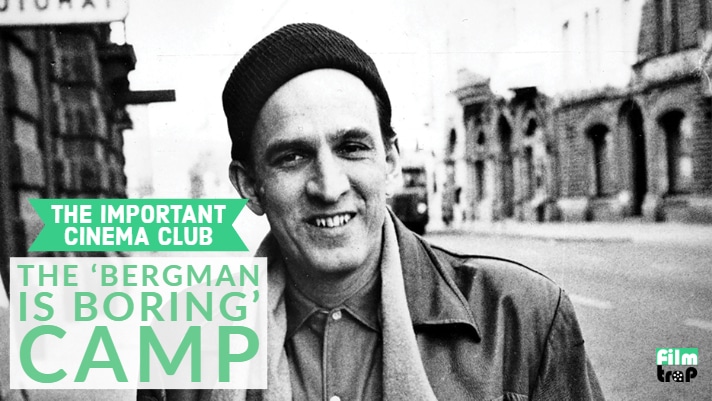 Gather round, drink an extra shot of espresso and get ready to talk about the Grandpa of European Art Film.  Justin and Will are joined by Ingmar Bergman ‘expert’ Dan Berube as they talk about the grumpy director’s career, discuss the classic The Seventh Seal and the terrible The Serpent’s Egg, and recommend some good Bergman starter films. Look, we have to talk about this eventually, so lets get it over with.

After his brother inexplicably commits suicide, unemployed Jewish-American circus performer Abel Rosenberg (David Carradine) is stuck in Berlin with his sister-in-law, Manuela (Liv Ullmann), a cabaret singer. Desperate circumstances lead to the pair taking jobs at a medical facility run by Professor Hans Vergerus (Heinz Bennent), who also offers to give them shelter. However, the clinic turns out be a very sinister place, and soon the lives of Abel and Manuela are in serious jeopardy.

The Seventh Seal (Swedish: Det sjunde inseglet) is a 1957 Swedish historical fantasy film written and directed by Ingmar Bergman. Set in Sweden during the Black Death, it tells of the journey of a medieval knight (Max von Sydow) and a game of chess he plays with the personification of Death (Bengt Ekerot), who has come to take his life. Bergman developed the film from his own play Wood Painting. The title refers to a passage from the Book of Revelation, used both at the very start of the film, and again towards the end, beginning with the words “And when the Lamb had opened the seventh seal, there was silence in heaven about the space of half an hour”. Here the motif of silence refers to the “silence of God,” which is a major theme of the film. The Seventh Seal is considered a classic of world cinema, as well as one of the greatest movies of all time. It established Bergman as a world-renowned director, containing scenes which have become iconic through homages, critical analysis, and parodies.