Resident Evil: After Life Proves That Nothing Matters

RESIDENT EVIL: AFTER LIFE is an empty endeavor in search of a purpose. Alice wanders the world looking for something, anything to give her a reason to keep moving, and all she finds are computer generated backdrops. It’s an unsubtle metaphor for the whole franchise. Where do you go after you’ve ended the world twice?

You make the journey to purgatory. 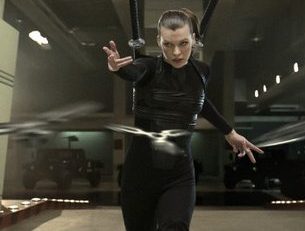 She has ninja stars now, because why not?

The film opens with a gloriously derivative (but fun!) action scene that lasts twenty minutes and only serves to completely re-set everything to square one. Remember those clones? They’re all gone! Remember Alice’s psychic powers? They’re gone too! Alice teams up with Claire Renfield, stows away in a prison, and meets a bunch of disposable victims. It reaches the point out outright parody with characters being introduced and then brutally murdered, without anyone batting an eye.

This was the first time Paul W.S. Anderson used a 3D native camera to shoot a film and he revels in the process. He lets scenes play out in languid tableaux that seemed to last an eternity. This is the only time the RESIDENT EVIL series could even come close to being called eye catching. The digital camera gives everything a polished unreal feel that dehumanizes the proceedings. It’s the post-2000s equivalent of Antonioni-like ennui transplanted to the remnants of a wheezing video game movie franchise. Stuff happens, but none of it matters.

The dogs can now turn into CGI monster? Yes, that is life.

The three action scenes that do pop up are fun, but just like the previous entry, they’re not very exciting. They can only be approached from a distance. In classic RESIDENT EVIL style, the ending is flat non-sequitur that still succeeds in recycling gags that were stale at the turn of the century. The further I get into this RESIDENT EVIL re-watch the more I feel like Jim Carry in ETERNAL SUNSHINE OF THE SPOTLESS MIND. I need to remember these things, but I know that eventually I will forget, and find myself in the exact same situation a little way down the line.