Re-watching Miami Connection and then watching it again. 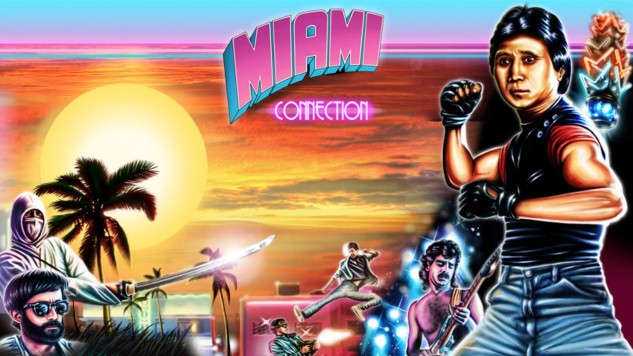 Re-watching Miami Connection and then watching it again.

I never ever get tired of watching Miami Connection and I show it to almost everyone I know, whenever the opportunity arises. Why? Because the quotability factor is high, the bizarre multi-plot narrative keeps me on my toes, and I see something completely new every time I see it.

Yes, Miami Connection is one of those movies.

Ok so here’s a little backstory first. In 1987-ish, a man named Grandmaster Y. K. Kim wanted to make a movie to promote all the good that Taekwondo can do for people. It was meant to have themes of friendship and coming together for a positive purpose. You will not get that from Miami Connection. Anyway the film was lost to time and dusty VCRs until a little rep theatre found it and decided it needed immediate distribution. Because who wouldn’t distribute this film?

I saw this in 2012 at Fantaisa, around the same time The Alamo Drafthouse released the Blu-ray set, with a theatre full of midnight movie goers who were extremely ready for the magic of a good-bad movie. I had no idea what I was getting myself into, but as soon as the ninjas started rolling in, I was hooked.

And then Dragon Sound started playing! And people were dancing in the aisles! I mean it was only about 10 minutes in, and people were going full Mama Mia on this movie! So Dragon Sound, if you’ve never heard their music, is the band that the whole movie is based around. The group is made up of 5 guys who are allegedly in college, who live together in a very small house and also practice Taekwondo together. There’s a random woman in there dancing around, but who cares, she’s having fun and she’s not hurting anyone.

Because her brother is in this super evil gang that pushes cocaine around Miami, with the evil ninjas. He shows up to the bar where Dragon Sound are playing and is ABSOLUTELY VEXED that his sister would dance up on stage and kiss the bass player! Yes, there are undertones of abuse towards women, specifically from the brother, but it’s never realized – and I think it’s more of a weird choice the actor made to just be super fucking angry at everything happening. Spoiler: it all works out.

So now the evil ninjas are mad at Dragon Sound, but that’s not enough. There’s another VERY ANGRY band that usually plays that club, and they want their spot back! But Y. K. Kim is not about to give up without an incredibly violent fight in the middle of the street! Beer is poured over heads awkwardly, people are ripped out of convertibles wearing belly tops and tight jeans, and a really serious amount of Taekwondo defense ensues.

So this tom foolery goes on with gang threats every which way all over the place. IN THE MIDDLE OF THIS, one of the band members receives a letter and delivers the performance of a LIFETIME. Holy cow, if you watch any of this movie, make it this scene.

For real, how many plots does this Miami Connection need? Because there is DEFINITELY a love story sprinkled around and random allusions to doing world tours with the band amidst very sexy, confusing beach scenes. it goes on and on and with each passing scene you have to ask yourself, how does this fit within the scope of this film? Well that’s the thing, all these wild stories are just how this piece of art happened to be put together. Through Y. K. Kim’s guidance, songs are rewritten to promote friendship while at the same time something super violent is happening, or being suggested by an army fatigue wearing goon. The dichotomy between love and hate and achieving world peace is really what this horrifically bloody film is all about.

It’s available, if you know what I mean. There’s literally no reason not to. But you can also get the Blu-ray for like, endless fun and super cool special features like a documentary on Y. K. Kim (who wouldn’t want that?). There’s also a pretty sweet 7″ for sale. I’ve listened to that about a million times too. You know, if you’re into that kind of thing. But there’s also this video that can get you almost as far as you need to go.

And if this song doesn’t convince you that you should open a new tab and find this amazing movie IMMEDIATELY, maybe Y. K. Kim’s final thoughts that appear at the end of this very violent and bloody movie will persuade you: “Only through the elimination of violence can we achieve world peace”. Wow.