Have you heard of the new fad that’s sweeping the nation? It’s BRUCESPLOITATION!

Bruce Lee’s death left a vacuum of expectation in its wake, so a bunch of weaselly producers decided to cash in on his name (and fool unknowing audiences in the process) by making the new Bruce Lee blockbusters! Grab a male actor that’s Asian, slap Bruce as his first name, and they got themselves a bona-fide paycheck! Did these savvy producers decide to expand the Lee myth and take his iconography into fascinating new areas? OF COURSE NOT. They merely rehashed the few iconic elements (Lee only made four feature films after all) into infinity. 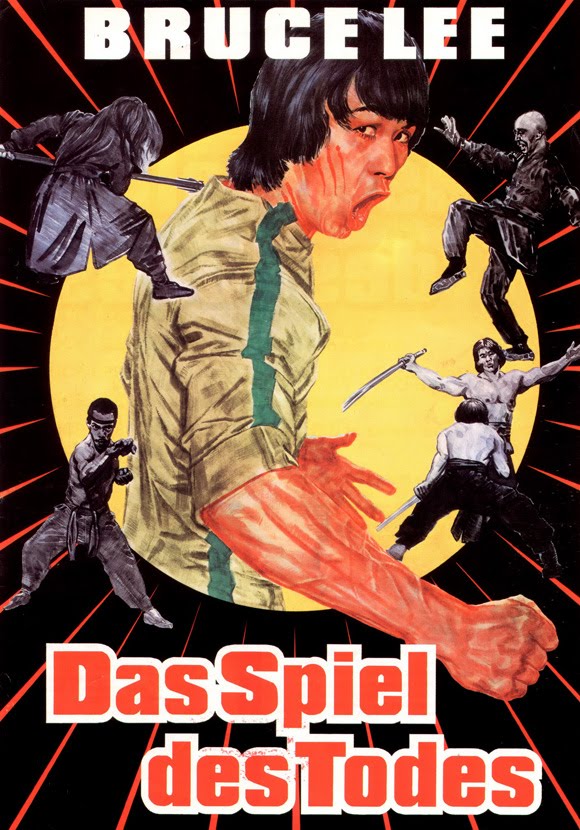 There’s Bruce Li (the best of the imitators), Dragon Lee, Bruce Leung, Bruce Leong and the confusingly named Bruce Le, to name only a handful. Bruce Le was one of the most ambitious ones, writing/directing/choreographing a lot of his pictures, and trying his best to give us the best damn Bruce Lee exploitation almost no money can buy. Some of them even turned out good!

This one is not one of those. 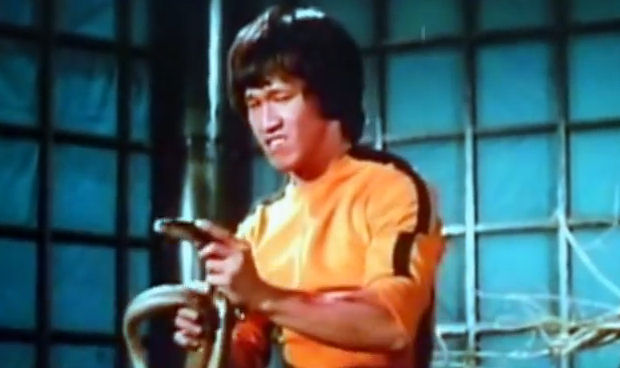 Enter the Game of Death is Brucesploitation at its most shameless and threadbare. Bruce Le stars as an unbeatable martial arts master that takes long walks in the woods and is constantly attacked by random Japanese thugs. He is asked by a bunch of wimpy martial artists to attack a Japanese pagoda and steal a very important document. Bruce refuses to fight (classic Bruce!), but after he sits in bed and has a flashback that rip-offs Angela’s Mao’s death scene from Enter the Dragon, Bruce (of the Le variety) decides that he’ll fight after all!

He dons the iconic yellow jumpsuit, enters the pagoda, and discovers that there’s a different martial artist on each floor. What starts off as a trek through surrealistic set-pieces (a guy uses snakes as nun-chucks!) quickly grows tired of its own premise and the villains devolve into “Guy with red light on his face” and “Tubby dude with bad wig.” It doesn’t help that Bruce Le does a full on Bruce Lee imitation with no variation. We get it! You stand there and lash out  unexpectedly! That a good action scene does not make.

The entire “Game of Death” segment of the film culminate with a baddie simply taking the document and running outside. Bruce Le chases after him and the end of the film turns into a generic ‘fighting-in-a-field” climax with another bunch of generic baddies.

In terms of Lee imitation, this one is a gold mine.

We’ve got the track suit, the pagoda, everyone’s favorite villain Bolo Yeung, the sister flashback, a bunch of black martial artists (Jim Kelley inspired a lot in Brucesploitation), and the evil Japanese.

It’s a real shame that the action, which takes up 85% of the film, is so blandly repetitive. There’s a touch of feverish insanity that would come to pass in future Bruce Le films, but it’s not enough here. Fun for a quick laugh, but not much else.

Bruce Le would go on to be a decent director and ditch the Lee imitations. His magnum opus Challenge of the Tiger (1980) is cult film gold. Bolo Yeung would go on to co-star in a hundred other Brucesploitation films. It’s a living!