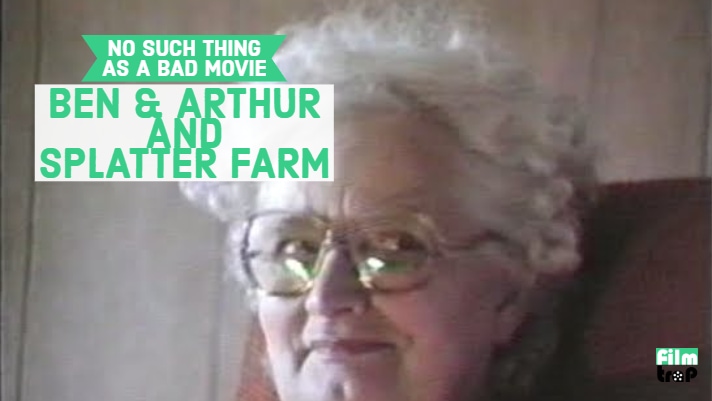 This week, Justin, Colin and April tackle the infamous Ben & Arthur (2002) and the shocking Splatter Farm (1987). Apologies to Sam Mraovich, whom we mistakenly refer to as “Steve Mraovich” several times in this recording.

Arthur (Sam Mraovich) wants desperately to be married to his lover, complete with a legal certificate, while Ben (Jamie Brett Gabel) doesn’t see the need to drag law into it and is happy with the way things are. Arthur’s own brother, Victor, is a major obstacle to his plans: a religious fanatic obsessed with saving his brother from a sinful lifestyle.
Just as the happy couple finally starts making progress with their wedding plans, Victor shows up with sin on his mind and a gun in his hand. Ready and willing to do whatever he thinks necessary, Victor pulls the trio into a dramatic chain of events that culminates in a showdown between the forces of religious conviction and the strength of a man in love.

The first feature film by the then-teenaged Polonia Brothers, whose last name would soon become synonymous with polarizing micro-budget genre features,  SPLATTER FARM tells the story of twins Alan and Joseph, who uncover murder and madness during a summer visit to their Aunt’s home.

Camp Motion Pictures announced the July 6, 2018 release of a limited-edition VHS Big Box of SPLATTER FARM, the 1987 shot-on-video horror film that achieved underground notoriety as part of the direct-to-video movement of the 1980s.