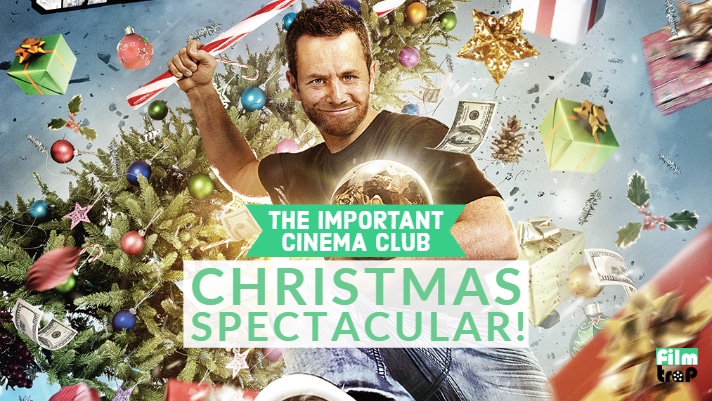 In a very special episode, “The Important Christmas Cinema Spectacular”, Justin and Will tackle the holiday cinematic season by watching the awful Kirk Cameron vehicle SAVING CHRISTMAS and the holiday ‘classic’ MIRACLE ON 34th street. They discuss their own feelings on faith, padding films to feature length, rapping bible songs, the existence of Santa Claus, and a slew of other Christmas Classics!

Saving Christmas (also known as Kirk Cameron’s Saving Christmas) is a 2014 American faith-based Christmas comedy film directed by Darren Doane and written by Doane and Cheston Hervey. It was theatrically released by Samuel Goldwyn Films on November 14, 2014. It stars Kirk Cameron as a fictional version of himself. In Saving Christmas, Cameron, after explaining his views on Christmas directly to the audience, tries to convince his fictional brother-in-law, played by the film’s director, that Christmas is still a Christian holiday. The film combines a comedic narrative with educational elements, in order to “put Christ back in Christmas”; it says that most of Christmas’ popular elements are biblical in origin, while criticizing the modern-day view of the holiday, especially from atheists. During the story, the film depicts some of the biblical events mentioned by Cameron, while he provides narration for the audience. The film received a 0% rating on Rotten Tomatoes. It was nominated in six categories for the 35th Golden Raspberry Awards and “won” four, including Worst Picture. It also became the lowest rated film on the IMDb Bottom 100 List within one month of its theatrical release, and is now considered one of the worst films of all time. Cameron blamed atheists for the film’s poor reception.

In this Christmas classic, an old man going by the name of Kris Kringle (Edmund Gwenn) fills in for an intoxicated Santa in Macy’s annual Thanksgiving Day parade. Kringle proves to be such a hit that he is soon appearing regularly at the chain’s main store in midtown Manhattan. When Kringle surprises customers and employees alike by claiming that he really is Santa Claus, it leads to a court case to determine his mental health and, more importantly, his authenticity.