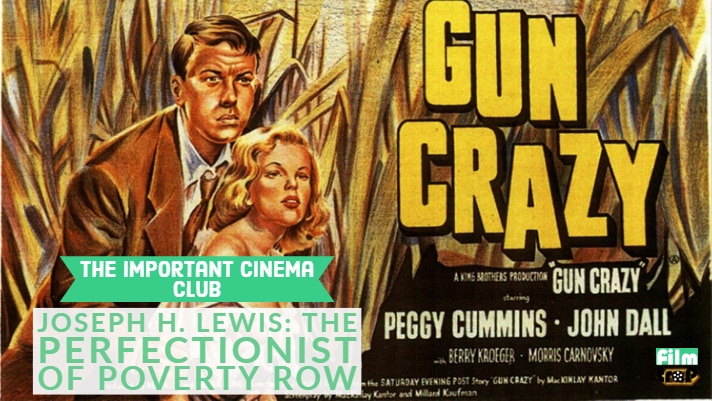 We discuss the career of director and film noir master Joseph H. Lewis and his films Gun Crazy, The Big Combo and Terror in Texas Town.

We have a NEW BOOK called THE IMPORTANT CINEMA CLUB JOURNAL and you can buy a copy now at:

On this week’s Patreon, we discuss the film People on Sunday. Become a member for $5 a month:

When gun-obsessed pacifist Bart Tare (John Dall) witnesses expert shooter Annie Laurie Starr (Peggy Cummins) demonstrate her firearm prowess at a carnival one night, it’s love at first sight. Aimless Bart joins the traveling show and begins a romance with Annie, but her dangerously rebellious spirit soon gets them both fired. After eloping, the young lovers embark on an armed robbery spree, managing to elude the authorities until Annie insists on pulling one last job.

Unemployed Julia Ross (Nina Foch) spots a job ad for a resident personal secretary, and is hired to work a certain Mrs. Hughes (Dame May Whitty), a widow who requests that she move in with her that very night. Julia leaves her old lodgings immediately to stay with her new employer, only to inexplicably wake up two days later in a mansion overlooking the sea. Even more strangely, Mrs. Hughes and her son, Ralph (George Macready), now insist that she’s not Julia Ross but Ralph’s wife, Marion.

When Swedish-American whaler George Hanson (Sterling Hayden) returns to his Texas hometown after 20 years at sea, he’s shocked to learn that his father was murdered just two days prior. The feckless local sheriff (Tyler McVey) won’t do anything about it, so George investigates on his own and discovers that an oil speculator (Sebastian Cabot) had his father killed for refusing to sell his land at an unfair price. Enraged, and armed only with a speargun, George goes looking for justice.