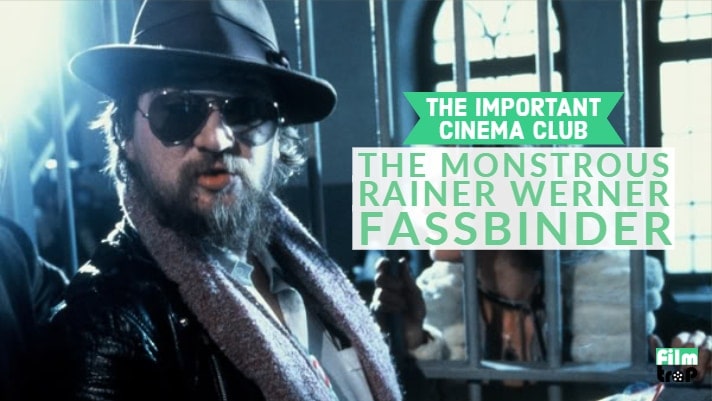 We discuss the career of the incredibly prolific writer/director Rainer Werner Fassbinder and his films The Bitter Tears of Petra von Kant, Ali: Fear Eats the Soul, and In a Year with 13 Moons.

On this week’s Patreon episode, we discuss HOW TO START YOUR OWN FILM CLUB.

“In the early 1970s, Rainer Werner Fassbinder discovered the American melodramas of Douglas Sirk and was inspired by them to begin working in a new, more intensely emotional register. One of the first and best-loved films of this period in his career is The Bitter Tears of Petra von Kant, which balances a realistic depiction of tormented romance with staging that remains true to the director’s roots in experimental theater. This unforgettable, unforgiving dissection of the imbalanced relationship between a haughty fashion designer (Margit Carstensen) and a beautiful but icy ingenue (Hanna Schygulla)—based, in a sly gender reversal, on the writer-director’s own desperate obsession with a young actor—is a true Fassbinder affair, featuring exquisitely claustrophobic cinematography by Michael Ballhaus and full-throttle performances by an all-female cast.” – CRITERION

Emmi Kurowski (Brigitte Mira), a cleaning lady, is lonely in her old age. Her husband died years ago, and her grown children offer little companionship. One night she goes to a bar frequented by Arab immigrants and strikes up a friendship with middle-aged mechanic Ali (El Hedi ben Salem). Their relationship soon develops into something more, and Emmi’s family and neighbors criticize their spontaneous marriage. Soon Emmi and Ali are forced to confront their own insecurities about their future.

Elvira Weishaupt (Volker Spengler), once a burly working-class butcher named Erwin, has made an enormous sacrifice for love. She has undergone a sex change for a romantic interest who has abandoned her, and she now must struggle to reconcile her past life with her present identity. The emotionally fractured Elvira visits influential acquaintances and old haunts in hopes of putting the pieces of her life back together — and of confronting her lost love.