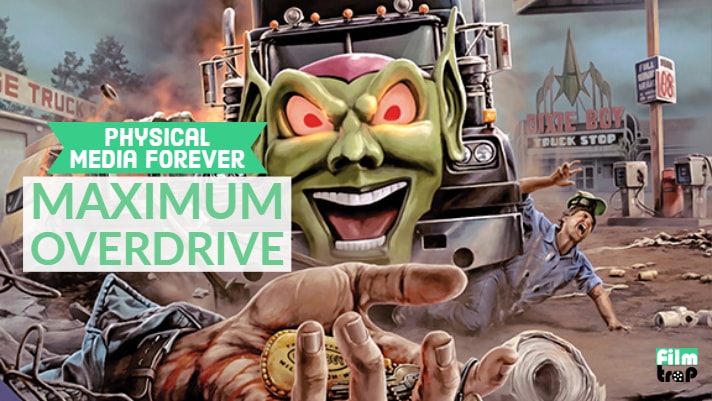 I’m a huge fan of this goofy ass trailer.

But I’ve never been a fan of MAXIMUM OVERDRIVE.

I like the fact that a coked out Stephen King directed a big budget B-movie and it has an all ACDC soundtrack, yet I’ve always I found the final product pretty dull. It’s got great ‘kill sentient trucks’ hook, but it’s obviously made by a director who has no idea how to pace, characterize or generate suspense. On my most recent viewing, I discovered how many great explosions the film features (Never take good explosion for granted), but it had all of the same problems I had experienced during my first VHS viewing: Why is Emilio Estevez so dull? Why are there thirty characters? Why do they just kind of hang around? Is that the climax? Really? I understand the nostalgic imprint a movie like can leave on someone who was the right age when it was released, especially with that amazing teaser and poster, but MAXIMUM OVERDRIVE never clicked on an entertainment level for me.

Still, Vestron Video knows exactly how to hook me with their releases, and when they announced the insane line-up of special features, I swallowed my critical opinion and went “I do want to hear from the people that made the movie…” 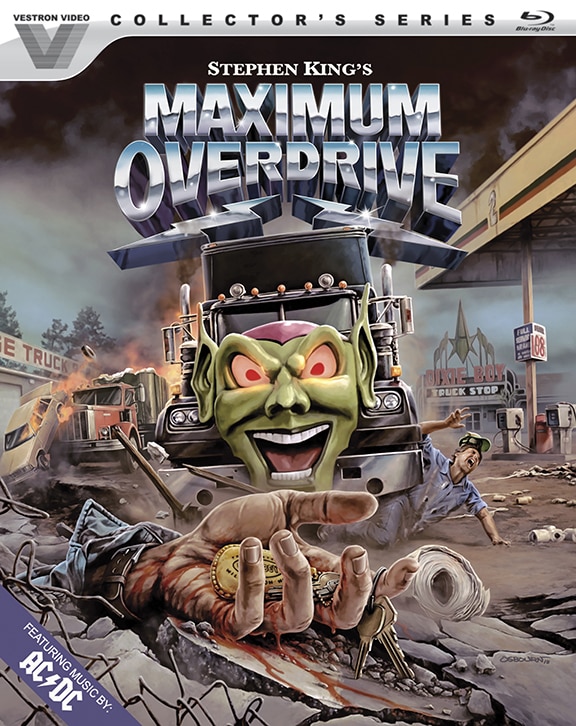 The disc boasts a spotless transfer, two commentary tracks, one by a Stephen King expert Tony Magistrale that overviews all of King’s cinematic adaptations, and one by super fans Jonah Ray and Ryan Turek. Most notably, there are a HUNDRED AND FORTY MINUTES of interviews shot by Red Shirt Pictures. And while Stephen King, who politely declined to participate, and Emilio Estevez are missing in action, everyone else is on board and filled with stories – The Kid (Holter Graham), Make-Up effects creator Dean Gates, producer Martha De Laurentiis, and even Yardley Smith, shows up.  I especially enjoyed the thirty-minute documentary that focused on the local North Carolina crew that worked on the production. No one has any super crazy stories, but there’s a pleasant sheen of fond remembrance.

The mythical ‘uncut’ footage that was famously documented in some Fangoria stills doesn’t make an appearance, but the disc’s producer swears he looked absolutely everywhere for it, and even Stephen King denies having a copy of the extra violent cut.

Like all Vestron Video releases, it sports a hefty high price point, but it’s without a doubt the greatest presentation the film will ever get.